Reinvest in Remote Company Culture as You Grow: 2 Ideas

Toggl has grown 20 percent in the last year. We now have people in five continents and 10 time zones, which means things are changing fast and we’re becoming a truly global company.

Our third annual Toggl meetup is in August and we’ll probably add a few more people by then.

So we decided to build on our remote culture before we outgrow our current one. After some brainstorming, we came up with a bunch of new ideas, but decided to try two of these for starters.

The idea is simple: every new employee gets a peer mentor or “Toggl Buddy” (this name is still a work in progress) who helps them out with setting up, explains the benefits and perks, helps them get introduced to the team, and—most importantly—gives them friendly advice for starting out at a new job.

Although our office manager does a splendid job of onboarding new employees, this personalized approach helps teammates get introduced to the unofficial rules, Slack etiquette, inside jokes, and more.

We got the idea from the team at Buffer and it came up a lot in our face-to-face meetups. New team members sometimes feel lost: their first week is usually about setting up accounts, remembering names, and getting used to all the noise in Slack. It can get overwhelming and the company culture doesn’t always surface in these first days.

However, after we introduced Toggl Buddies, our new teammates felt more inclined to join conversations, ask questions, and joke around in Slack. So instead of feeling like entering a big party where you don’t know anyone, now they have a familiar face to talk to, get introductions through, and have fun.

As Nina, our patient zero in this experiment, said, it felt good to talk to someone outside of her immediate team. With everything else being chaotic, having someone to just chat with at the end of the day felt good.

We wanted to get people talking and sharing experiences about remote work, work-life balance, and day-to-day stuff we don’t normally discuss in our Slack. So, on the last Wednesday in May, we asked our employees to change their work environment for the day and share pictures from their new workspaces.

It seems simple enough, but it’s a tried-and-tested method that many companies do to introduce more kinship among a distributed workforce.

We ended up with a productive and cheerful day, getting a better glimpse into the lives and homes of our coworkers, learning about their routines, their home decor taste, where they get their inspiration, and who they like spending their breaks with.

We thought we’d share the results of our Out of Office Day to offer some ideas, and hopefully, inspiration. Here are a few of the workspaces that played host to Togglers:

1.) Merlyn, our wizard from the U.K., writes code sandwiched between a classy drumset and a rugged bottle of Prosecco (the finer things). Jury’s still out on how much of that bottle was left two minutes after the photo was taken. 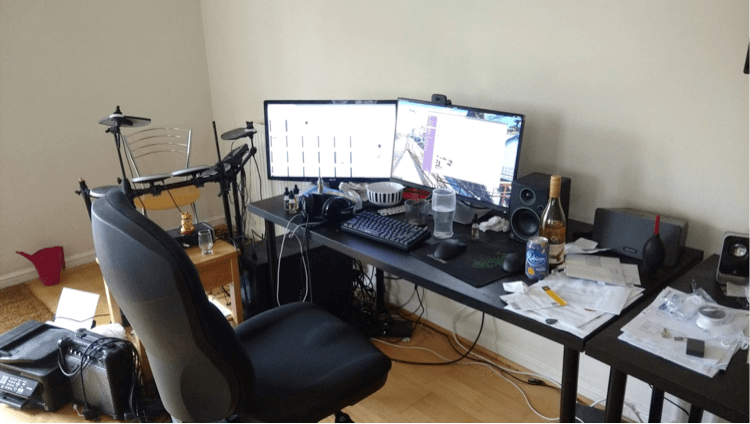 2.) Artur, in Poland, took the prize for most vegan landscape workspace, filled with lush vegetation, lemon water (I mean, seriously?), and a picturesque apple. We remain unconvinced that he didn’t just find a stock photo from his basement. 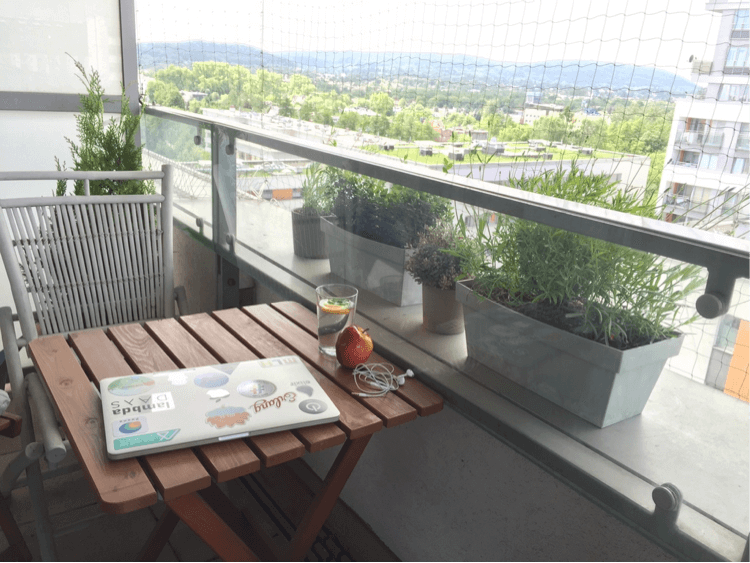 3.) Vedran is our newest employee from Croatia. A simple man with simple tastes, he does support from his nice, clean desk flanked by two speakers (presumably playing loud 90s rap, but we’re not entirely sure). 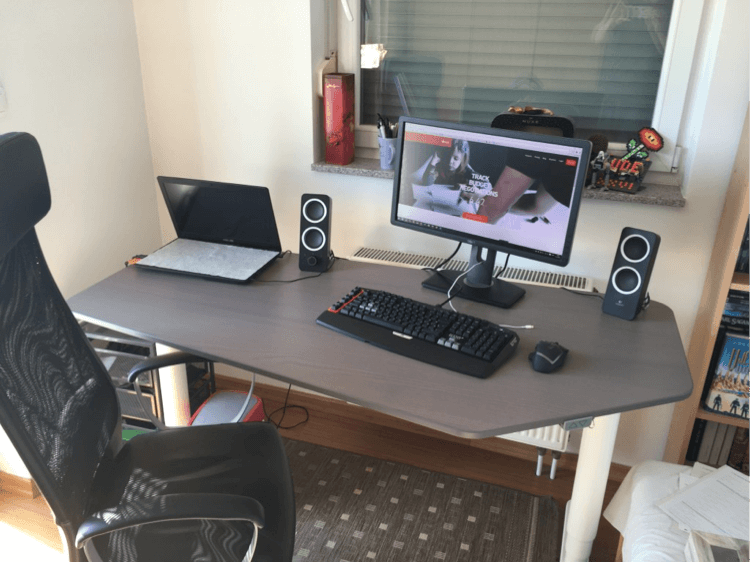 4.) Indrek works out of his home in Estonia. Pictured is a suspiciously pristine desk bookended by a pair of beautiful photos of his loved ones. Not pictured is the five tubs of hastily removed protein powder previously blocking said photos. 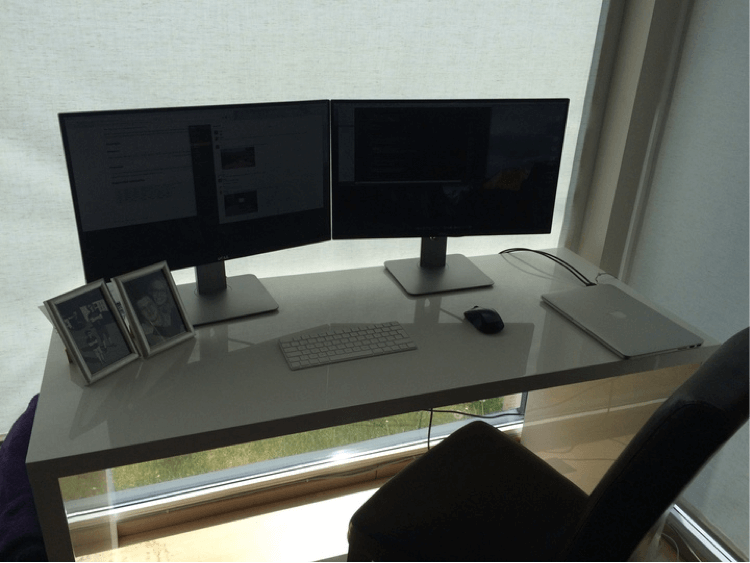 5.) Andrin decided to wake up and be a jerk by sending us a photo of his office in Thailand. We’re all very happy for him. Incidentally, a space just opened up to join the front-end team if you’d like to apply. 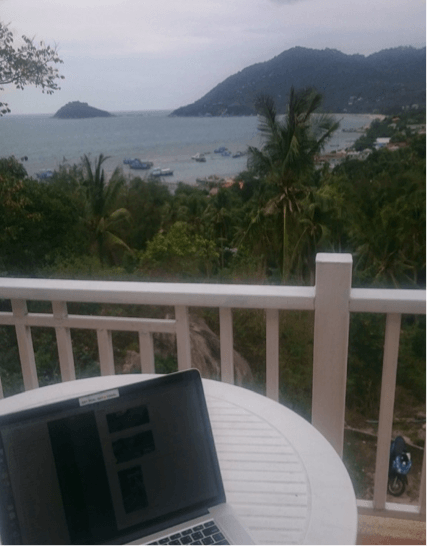 6.) Not to be outdone, folks at our Tallinn office decided to show the rest of these travelling whippersnappers what they were missing out on. 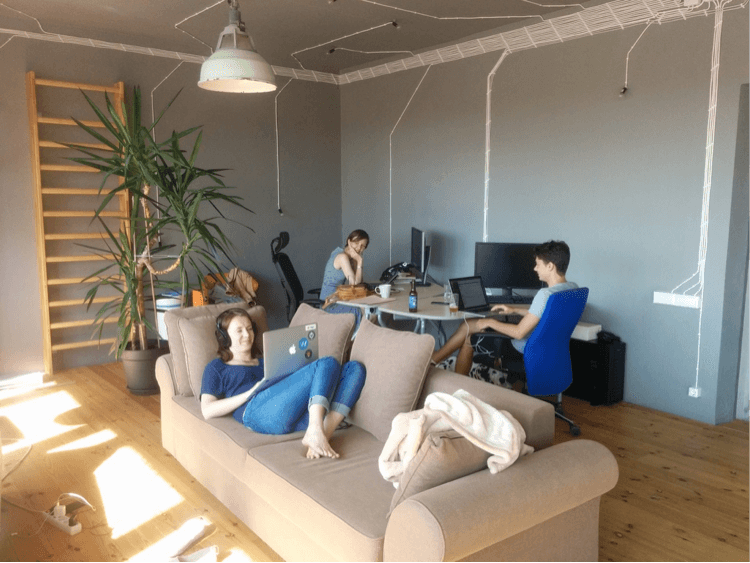 So there you have it! The Out of Office Day was a great success, with everyone getting a glimpse of everyone else’s work day. Albeit a simple concept, it helped reinforce company bonds and brought us that much closer, despite the oceans between us. We’re actively looking at more ways in the day-to-day to keep team spirit up, which we’ll be happy to share in the future.

What sorts of activities have you tried that successfully bolstered team spirit? How do you draw the line between contrived Dilbert-esque “happy corporate” bonding, and fostering a real, authentic culture and relationships?

Dunja Lazic and Naeem Talukdar are passionate about productivity, remote work, and startups. At Toggl, Nadeem is a front-end developer and Dunja is a media manager. Together, they’re making Toggl a household name.