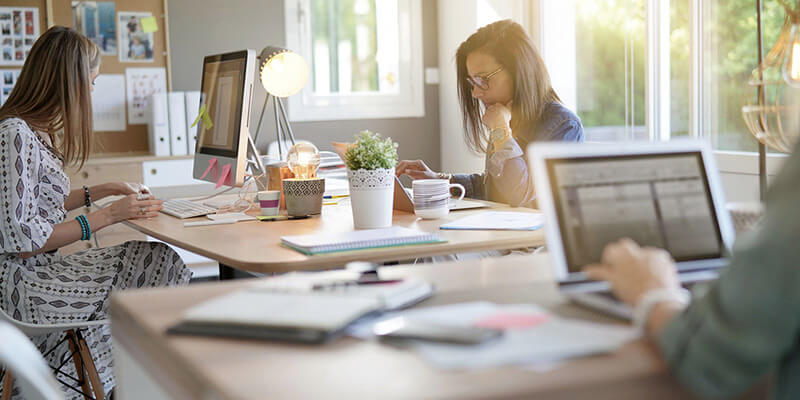 Remember when “e-mail” was mysterious and oddly hyphenated? Then it became such an important part of our vernacular that we couldn’t be bothered with punctuation anymore. Thanks to explosive interest in workspaces to accommodate small businesses, startups, and freelancers, coworking has joined these hallowed ranks. What was once an oft-misunderstood term is now so ingrained in the remote work vocabulary that interesting niche spaces have sprung up in a number of locations.

Do you identify as female? There’s a coworking space just for you. New parent? Yep, there’s one for you, too. New mother and startup founder? You bet there’s a franchise out there with your name on it, along with a cohort of workers who share similar personal circumstances.

As remote work evolves and becomes an increasingly popular choice for professionals of all ages, cities around the world are stepping up to the niche coworking plate to offer options that bring everyone to the table.

Here are some examples of niche coworking options for remote workers:

A Place for Those Seeking Community

With entrepreneurship often feeling like a male-dominated career path, Hera Hub founder Felena Hanson wanted to establish a coworking space for women that was safe, serene, and totally inspiring for lady bosses. An article on her spa-like collaboration space in the New York Times intrigued another female entrepreneur so much that she convinced Hanson to license the Hera Hub brand name for a satellite space in Washington, D.C. What began as a single space in one California city now encompasses 10 locations across five U.S. states, and there’s even one in Sweden! I think we can all agree it’s not too often that Scandinavians are following American trends, so it seems that Hanson was onto something here.

A Place for Those in Emerging Industries

There’s no doubt that coworking spaces are important for companies and their remote teams. They enable collaboration, foster interpersonal skills, and offer far-flung teams a chance to meet up and tackle projects together. But for some companies, coworking spaces aren’t just helpful, they’re necessary. There’s no industry in which this is more true than cannabis. Jessica VerSteeg, CEO of Paragon, recalls the hurdles she faced when trying to find office space. “Even though I wasn’t growing cannabis myself, landlords were reluctant to let me inside their properties. If they agreed to let me lease the space, they usually asked for more money as they believed my type of business would put their entire property at risk.” This is precisely why VerSteeg is opening her own coworking space specifically geared toward cannabis entrepreneurs and their ventures.

A Place for Those Who Are Most Observant

The biggest benefit to all this niche coworking is the inclusivity it promises, especially for the highly religious set. It’s common knowledge now that Tel Aviv, Israel, is the new Silicon Valley (or Wadi, as it’s locally known), with a thriving scene that sees new cyber security, finsec, fintech, IoT, etc., startups hitting the web nearly every week. But with the majority of these budding young businesses headed by secular folks, there’s a segment of the population that’s been largely left out: ultra-Orthodox or Haredi Jews. KamaTech, a nonprofit bringing ultra-Orthodox people into greater contact with Israel’s burgeoning tech landscape, put Moishe Friedman in charge of a new kind of coworking space managed by an ultra-Orthodox team. Called Ampersand, the space offers a kosher kitchen that adheres to Judaism’s strictest religious dietary laws, an onsite synagogue, and also runs in accordance with the Hebrew calendar.

How to Build Engagement In Your Remote Team