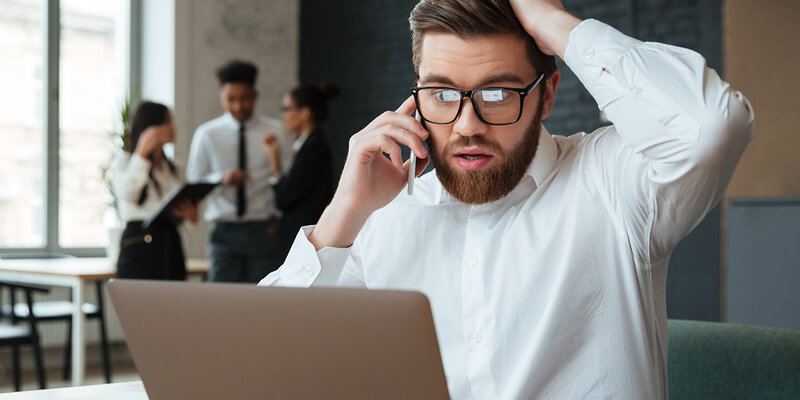 Fear. Fear of different. Fear of new. Fear of the unknown. It served our prehistoric ancestors well by allowing them to quickly recognize and flee from danger or potential threats, and to be wary of a new type of creature until it was clear that it ate grass instead of raw, bloody flesh.

Although humans are no longer living in the wild, this survival mechanism is deeply embedded into our DNA. It causes us to quickly judge and avoid anything different, anything unknown. But in the modern workplace, rather than help us, it does us a huge disservice: it makes us fear change, even when that change can be for the best—both for the company and for individual workers.

Working remotely is an example of a change that conjures fear. It’s so fundamentally different to what we’re used to in the traditional workplace that many assume it’s one of those creatures that wants to eat us; when really, if we give it a try, it’s actually one of the useful creatures that makes life much easier and more enjoyable.

Luckily, as humans, we can question and analyze our own fears, examine what we are truly scared of, and then reduce it by understanding it.

When we dig into the reasons managers might be against remote work, we usually find that they are “gut-instinct” fears which have been formed through stereotypes, one-off horror stories, unconscious bias, and their own experience of what has worked for them (which, if they have only worked in a traditional workplace, will of course be based on traditional work practices—the familiar).

In this article, I’m not going to say these fears won’t come true. On the contrary, I’m going to argue that they will happen, and they should happen. Because these fears, when they come true, benefit workers and their productive output rather than stifling it and killing business. Put simply, these fears are arguments for remote work and flexibility.

Below are some common fears about remote work that employers may have:

What if they don’t work all day?

This is the overarching fear that managers have of remote workers: what if they’re doing other stuff besides work? But it also carries an assumption that, once addressed, will help managers relax about the rest of the fears. That assumption is that people in the traditional workplace are consistently productive all day. This is untrue. It may indeed look like people are busy all day; but in truth, most people can only fully focus on a task in short bursts—up to a total of about three hours per day. The rest is usually busyness for the sake of looking busy.

Parkinson’s Law is a great description of how people are highly adept at filling time with a task, even if it could have been done in a fraction of that time. Translated to a normal workplace, people will fill a normal eight-hour day with work regardless of how long that work could have been completed. There’s often no benefit to completing it any faster.

People who are not under constant supervision due to working remotely are able to focus wholeheartedly on their work, and then rest wholeheartedly, guilt-free, when their brain stops working, thereby not spending precious energy on appearing busy. This adds energy to their productive time, increasing both the quality and quantity of their work.

What if they do chores?

A popular one—especially when combining the fear of what people do when no one is looking with the gender bias of what women might do if no one is looking. Putting aside gender inequality for a moment, let us imagine what happens if someone does decide to do housework during the day.

It’s recommended for health and longevity that people who have sedentary jobs stand up and move around regularly throughout the day. It’s also recommended that people have consistent periods of rest from their work to ensure maximum productivity—after 25 to 50 to 90 minutes of work, according to various sources.

So let’s say that someone decides to vacuum the house during the day. This might take about half an hour in total. If they break that into a few sessions of ten minutes each, this would be a great way to get out of the chair and get some blood into the muscles, rest and refocus the mind, and knock off a task that would take up family and leisure time later.

Coming back to gender inequality, let’s say the person working from home is a man, and has a female partner, and maybe a kid or two. If this man decides to have a quick break from his spreadsheets to fold the family’s clothes, that will not only allow him to refocus and get some blood flowing through his body and brain, but will also increase his share of housework done for the week; hence reducing the gender “chore gap.”

What if they sit around in their pajamas all day?

While seemingly silly to worry about what someone wears during the day, you’d be surprised how often this one comes up. There’s something deeply visceral about the image of someone in their dinosaur PJs while working: it’s incongruent, it’s wrong. There’s no way someone can be in a professional mindset if they’re not wearing professional clothes—especially those very useful ties (can someone please tell me what function this neck-choking, sauce-catching, expensive piece of fabric serves?).

There are results showing that confidence levels increase with more formal wear, and levels of relaxation rise with more casual wear, each of which could influence productivity depending on the type of work being done. The most relevant factor, though, comes back to one of our fundamental needs—having the freedom to choose. If someone feels they work better in a suit, they should wear a suit; if someone feels they work better in their underwear, why not? Flexibility is not just about time and location; it’s about autonomy and having a sense of agency.

Think also of the time saved not ironing when you can just throw on a T-shirt and shorts, money saved on expensive work shirts and dresses, and the feeling of just being yourself during the day without the need for pretence.

What if they take a nap?

Another image incongruous with work is someone fast asleep at two in the afternoon while snuggling up to their teddy. It never happens in the normal workplace, so it’s pretty much unthinkable that someone could have a nap and still have a productive day. But many famous leaders and thinkers (who had the power to control their own day), such as Albert Einstein, Winston Churchill, and Thomas Edison, swore by the power of the nap—to either catch up on sleep or reinvigorate the mind.

Having a nap is great because:

So, if you want your employees to catch a second wind of productive work in the afternoon, don’t worry about that twenty minutes they might spend in dreamland. Hope for it!

What if they work on their side business?

Probably one of the biggest fears managers have—especially with the current cohort of millennials who are constantly on a quest to become rich entrepreneurs—is that people will work on work that is not the work they’re being paid to do: crushing their side project.

But when someone uses their brains for something else other than their normal work, and something they are deeply passionate about (as is the case with most side projects), they not only become happier and more engaged with their “real” work, but they also develop other, transferable skills which they may not have developed with their normal job, benefiting not only their own career, but the company as well.

This goes for any other pursuits. Practicing a musical instrument, for example, uses other parts of the brain and helps the employee rest and develop themselves at the same time, allowing them to come back to their work with gusto.

As with our ancient ancestors who had to test the world around them to see what was poisonous and what was nutritious, the only way around the fear of remote work is to give it a go. We need to test it out and see for ourselves that it’s not dangerous. Relax a little, treat workers as adults, set targets and expectations based on outputs rather than “time working,” then watch the results flow.

As flexibility and freedom become more common, the unknown will become the known, and we’ll wonder why we ever feared it all.

How to Stay Focused During a Video Call

How to Learn More About a Company's Culture

Looking to Grow and Scale Your Freelance Business? Here's What One Freelancer Did